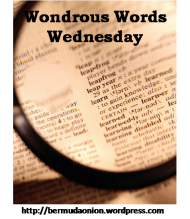 Wondrous Words Wednesday is a weekly meme where we share new (to us) and interesting (to us, again) words we encountered in our readings. See this week round-up at BermudaOnion’s blog!

This week I am reading John Irving’s Last Night in Twisted River and from the many (mostly food-related) new words, I decided to share two that in some sense give a taste of the book.

The wanigans themselves were disappearing.

According to The American Heritage® Dictionary of the English Language, via TheFreeDictionary.com, a wanigan can be defined as follows:

It is interesting that the definition states the regional difference, because this scene is not set in Alaska, but still the way the word is defined inside the novel sounds more like #2:

Not long ago, the only dining lodge on a river drive hadn’t been a lodge at all. There once was a traveling kitchen that had been permanently built onto a truck body, and an adjacent truck on which a modular dining hall could be taken down and reassembled […] Those curious shelters for sleeping and eating and storing equipment had not only been mounted on trucks, on wheels, or on crawler tracks, but they were often attached to rafts or boats.

Now, the novel goes on to talk about the word itself, and this obviously picked my curiosity:

The Indian dishwasher — she worked for the cook — had long ago told the cook’s young son that wanigan was from an Abenaki word, leading the boy to wonder if the dishwasher herself was from the Abenaki tribe. Perhaps she just happened to know the origin of the word, or she’d merely claimed to know it. (The cook’s son went to school with an Indian boy who’d told him that wanigan was of Algonquian origin.)

So what has the dictionary to say about this? Apparently the Indian boy was correct, but the Abenaki also spoke Algonquian, so… I’m afraid I know too little about Native American tribes and languages to comment:

Regional Note: Wanigan is apparently borrowed from Ojibwa waanikaan, “storage pit,” from the verb waanikkee-, “to dig a hole in the ground.” Nineteenth-century citations in the Oxford English Dictionary indicate that the word was then associated chiefly with the speech of Maine. It denoted a storage chest containing small supplies for a lumber camp, a boat outfitted to carry such supplies, or, as in Algonquian, the camp equipment and provisions. In Alaska, on the western edge of the vast territory inhabited by Algonquian-speaking tribes, the same word was borrowed into English to indicate a little temporary hut, usually built on a log raft to be towed to wherever men were working.

Your mom was still dancing around them, doing her pretty little do-si-dos.

According to Wikipedia, do-si-do is an alternate spelling of dosado, and here’s from their definition:

A dosado is a basic dance step in such dances as square dance, contra dance, polka, various historical dances, and some reels. It is a circular movement where two people, who are initially facing each other, walk around each other without or almost without turning, i.e., facing in the same direction (same wall) all the time. In most cases it takes 6-8 counts to complete. The term is a corruption of the original French term dos-à-dos for the dance move, which means “back to back”, as opposed to “vis-à-vis” which means “face to face”.

The novel says as much:

Danny knew that a do-si-do was a square-dance figure. […] Jane had demonstrated a do-si-do for Danny; with her arms folded on her enormous bosom, she passed by his right shoulder, circling him back-to-back.

Still confused? I was, so I looked for videos, and found this one that shows the dosido, together with other figures:

And while looking for videos, I came across this page, which does not really help with the definition, but which I want to share because it’s genius and I love new ideas for explaining science: how to use square dance to explain symmetry. (On a side note, the Carleton College page links to a site called The Dance of Mathematics, where I just read that this concept was presented here in Coimbra last year. Shame that I missed it!)

In italiano In English